After the invitation of the mayor mr. Christos Eleftheriou, a team of foresters visited on the 2nd of August 2019, the castle hill of Servia/ Kozani in order to identify flora health issues of the local forest, and suggest measures to mitigate their impact. This team was led by dr. Dimitrios N. Avtzis, Researcher in the field of Forest Entomology (Forest Research Institute, Hellenic Agricultural Organization Demeter) and two foresters Kontstantinos Kontos and Lampros Papalampros (HOMEOTECH Co).

The on-site survey revealed the occurrence of bark beetles of Scolytinae subfamily, which were responsible for about 10% of the dead and dying pine trees. This local population outbreak of bark beetles was favored by the accumulation of dead biomass in concert with high temperatures and low moisture during spring and summer. As a consequence of this population outbreak, these bark beetle species have become able to infest even healthy pine trees, something that threatens the pine forest of the castle hill of Servia as a total.

To limit the impact of this population outbreak, infested trees should be logged down and removed away from the stand, something that will drastically reduce not only the population of bark beetles, but also the availability of food for the insects. In addition to that, the network of pheromone traps will be installed in order to regularly monitor the population level of these species. Should this approach be considered effective, then this network can be further intensified so to perform mass trapping against these bark beetle species, always taking into account the particular conditions and location of this stand. 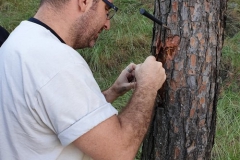 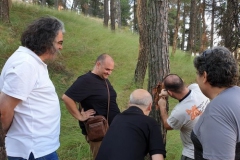 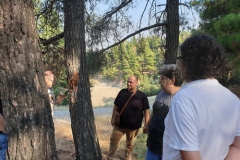 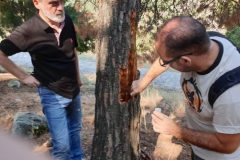